After discovering the truth about her Oleah origins, Angel thought she could still have a normal life, consisting of normal things - like her seventeenth birthday party. But there is no such thing as normal for Angel anymore. She learned that the hard way"

I received this book for free from the author in exchange for an honest review. This does not affect my opinion of the book or the content of my review.

Michelle Johnson has surprised me again. I can’t say too much about the plot of this book because it is the second in a series, but I will say that it picks up immediately after the events of the first book, Truth. [You can see what I had to say about the first book in my review here.] Angel has been thrust into the world of the Oleah, her true heritage, and she has to learn how to accept this, while also trying to save the universe.

After the whirlwind pace of the first book, I actually felt like the beginning of Justice was a bit slow. The characters had to make a plan of action, so there was a lot of talking and strategizing (and a little bit of teenage angst thrown in for good measure). I know these scenes were necessary, but they didn’t grab my attention nearly as much as those scenes with more action and suspense. Also, it seemed like Angel accepted the news that she is the princess of an alien race with superhuman powers a little bit too easily. One second she was a teenage girl worrying if the cute guy in school liked her, and the next she was ripping out people’s hearts with her bare hands and not blinking an eye. I would have liked to see a bit more development of her character in that regard.

Despite the slow start, the second half of the book really hooked me. I have learned that Michelle Johnson can create some pretty cool twists in her stories. Whenever I think I have things figured out, I soon find out that I am completely wrong. The twist in this story was really intriguing and kept me wondering. I’m definitely interested in seeing what happens to the characters next after that dramatic ending!

If you are looking for something different, I suggest you give the Oleah Chronicles a try. The premise is like nothing I have read before and the books are fast, fun reads. I think I enjoyed Truth just slightly more than Justice, but they are both enjoyable and would make for a great beach read. Check them out this summer and let me know what you think!

When you are surprised yet again….. 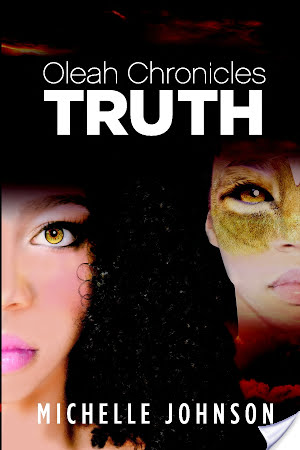 ***I received this book for free from the author in exchange for an honest review.*** Oleah Chronicles: Truth tells the story of Angel, an average teenage girl dealing with overprotective parents and the drama of high school. Until everything she knows about her life gets turned upside down as she approaches her seventeenth birthday. A boy named Zander transfers into her school and they instantly form a deep connection. Angel […]