Lauren Dailey is in break-up hell.
Stuck between moving on and letting go, she puts on a brave face while crying herself to sleep at night. But when a mysterious voice promises escape from her sadness, she is suddenly transported to a new world. And in this place, the slightest touch pulls her out of her tortured emotions into the mind of another - an empath.
The villagers - sweet Aerona and her mischievous twins, wise Siors, and hunky Cefin - welcome her and the blessings her empath powers bring. But this world is not without its dangers. The Anghenfil, a fire-breathing monster, has haunted the village for decades, and has a taste for empaths. And that mysterious voice promising escape from sadness? It's sounding more like a whisper tinged with smoke and embers.
Can Lauren keep the monsters in the mountain and in her head at bay? Or will she succumb to the darkness like the empath before her...

Piracy is a game. How much are you worth?
Since she was a little girl, everyone - from her father to the Great Creator himself - told Lyssa Peate the same thing: she's worthless. But when she becomes the pirate bounty hunter Razia, she can see the price tag on her own head. Employed by one of the four pirate syndicates, she uses bank transactions and her considerable wits to capture rival members. At least, she would be if Razia's boss ever gave her a chance. It's a man’s world, and all she’s allowed to hunt are purse snatchers while she languishes on probation.
To pay the bills, she's stuck in her old life as Lyssa, discovering and analyzing distant planets and selling them for cash. She's doing just enough to stay out of trouble, pretending to be continuing her father's mysterious research while away for long periods of time. Her slimy boss is always asking questions and even assigns one of her younger brothers, Vel, to intern with her. Already struggling to keep the balance between her double lives, she tries everything to rid herself of the kid...
...until the universal police mistake Lyssa’s intern for Razia's hostage
Double Life is the first in a four-book, new adult space opera series that readers call "well-written, entertaining, and engaging" with "a healthy dose of snark."
Those that love The Razia Series also love: Space Pirates, Bounty Hunters, Firefly, Cowboy Bebop, Space Westerns, Strong Female Characters,
Additional Keywords: Colonization, Exploration, Science Fiction Series, Tales, Novel, Family Siblings, New Adult

"Enchanting and complex. Every page is filled with magic." —Danielle Paige, New York Times best-selling author of Dorothy Must Die
Nothing says Happy Birthday like summoning the spirits of your dead relatives.
Alex is a bruja, the most powerful witch in a generation...and she hates magic. At her Deathday celebration, Alex performs a spell to rid herself of her power. But it backfires. Her whole family vanishes into thin air, leaving her alone with Nova, a brujo boy she can't trust. A boy whose intentions are as dark as the strange marks on his skin.
The only way to get her family back is to travel with Nova to Los Lagos, a land in-between, as dark as Limbo and as strange as Wonderland...
Praise for Labyrinth Lost:
"Zoraida Córdova's prose enchants from start to finish. Labyrinth Lost is pure magic." —Melissa Grey, author of The Girl at Midnight
"Magical and empowering, Labyrinth Lost is an incredible heroine's journey filled with mythos come to life; but at its heart, honors the importance of love and family." —Cindy Pon, author of Serpentine and Silver Phoenix
"A brilliant brown-girl-in-Brooklyn update on Alice in Wonderland and Dante's Inferno. Very creepy, very magical, very necessary."—Daniel Jose Older, author of Shadowshaper
"Labyrinth Lost is a magical story of love, family, and finding yourself. Enchanting from start to finish." —Amy Tintera, author of Ruined.

Lyra
From a distance, the Haven Institute, tucked away on a private island off the coast of Florida, looks serene and even beautiful. But up close the locked doors, military guards, and biohazard suits tell a different story. In truth, it is a clandestine research facility where thousands of replicas, or human models, are born, raised, and observed.
But when a surprise attack is launched on Haven, two of its young experimental subjects—Lyra, or 24, and the boy known only as 72—manage to escape. As they make their way through a new and menacing environment, they meet a stranger named Gemma, who has embarked on a perilous quest of her own. And as Lyra tries to understand Haven’s purpose, she uncovers earth-shattering secrets that will change the lives of both girls.
Gemma
Gemma has been in and out of hospitals her whole life. A sickly child, she has grown into a lonely adolescent whose life is circumscribed by home, school, and her best friend, April.
But after she is nearly abducted by a stranger claiming to know her, Gemma starts to investigate her family’s past and discovers her father’s mysterious connection to the secretive Haven research facility. Hungry for answers, she travels to Florida, only to stumble upon two human models, or replicas, 24 and 72—and a completely new set of questions. As Gemma tries to unravel the mysteries of Haven, she learnes terrible truths about herself and her family that will threaten to destroy everything she loves.
Two girls, two stories, one novel.
While the stories of Gemma and Lyra mirror each other, each contains revelations critically important to the other story. Their narratives can be read separately or in alternating chapters.

Ever the Hunted (Clash of Kingdoms, #1) by Erin Summerill
Published by HMH Books for Young Readers on December 27th 2016
Goodreads

Seventeen year-old Britta Flannery is at ease only in the woods with her dagger and bow. She spends her days tracking criminals alongside her father, the legendary bounty hunter for the King of Malam—that is, until her father is murdered. Now outcast and alone and having no rights to her father’s land or inheritance, she seeks refuge where she feels most safe: the Ever Woods. When Britta is caught poaching by the royal guard, instead of facing the noose she is offered a deal: her freedom in exchange for her father’s killer.
However, it’s not so simple.
The alleged killer is none other than Cohen McKay, her father’s former apprentice. The only friend she’s ever known. The boy she once loved who broke her heart. She must go on a dangerous quest in a world of warring kingdoms, mad kings, and dark magic to find the real killer. But Britta wields more power than she knows. And soon she will learn what has always made her different will make her a daunting and dangerous force.

When you review on Cornerfolds….. 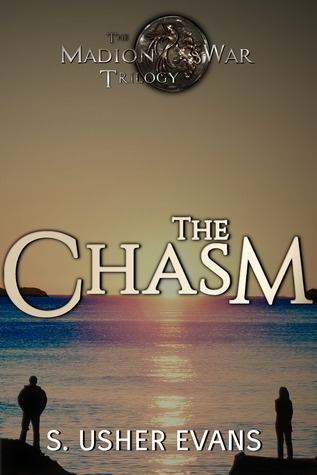 Wow, Sush, you have done it again. It is always a teensy bit nerve-wracking to pick up a book written by a friend, but S. Usher Evans has yet to let me down. I really enjoyed The Island, the first book in the Madion War series (check out my review here), so I jumped at the chance to review it’s sequel, The Chasm, and be a part of the blog […]

Sunday Street Team was created by the amazing Nori at ReadWriteLove28. To sign up to join the team, click here. Review: Well, let me start off by saying, I was really nervous about reading The Island. I have developed a friendship of sorts with S. Usher Evans on Twitter (she’s AWESOME, by the way), and it is always a little scary to read something written by someone you “know.” Also, I was concerned that […]