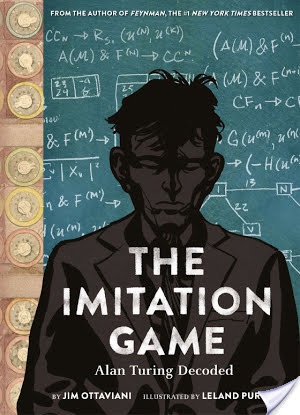 Award winning authors Jim Ottaviani and Leland Purvis present a historically accurate graphic novel biography of English mathematician and scientist Alan Turing in The Imitation Game.   English mathematician and scientist Alan Turing (1912–1954) is credited with many of the foundational principles of contemporary computer science. The Imitation Game presents a historically accurate graphic novel biography of Turing’s life, including his groundbreaking work on the fundamentals of cryptography and artificial intelligence. His code breaking efforts led to the cracking of the German Enigma during World War II, work that saved countless lives and accelerated the Allied defeat of the Nazis. While Turing’s achievements remain relevant decades after his death, the story of his life in post-war Europe continues to fascinate audiences today.   Award-winning duo Jim Ottaviani (the #1 New York Times bestselling author of Feynman and Primates) and artist Leland Purvis (an Eisner and Ignatz Award nominee and occasional reviewer for the Comics Journal) present a factually detailed account of Turing’s life and groundbreaking research—as an unconventional genius who was arrested, tried, convicted, and punished for being openly gay, and whose innovative work still fuels the computing and communication systems that define our modern world. Computer science buffs, comics fans, and history aficionados will be captivated by this riveting and tragic story of one of the 20th century’s most unsung heroes.

I’ve never reviewed a graphic biography before, so this is a fun first for me! I picked this book up at ALA Midwinter, and it really intrigued me. Honestly, I didn’t know very much about who Alan Turing was before I read this, but I have always been interested in the German Enigma machines of World War II and the incredible scientists that managed to crack the codes.

I thought the idea of telling Alan Turing’s story in this graphic format was really interesting, but the execution was lacking a bit for me. I read the ARC and that meant all the images were in black and white. There was a note included in the book that said that the finished copy would have colored sections and black and white sections. This was supposed to help the reader distinguish who’s point of view the story was being told from at the time. Hopefully, this does help in the finished copy, because I found myself really confused throughout a lot of the book.

The story was set up like an interview. There was an interviewer asking questions, which were being answered by friends and family of Alan Turing (and I think sometimes Alan’s voice made and appearance, too, but I’m honestly still a little confused about that). I don’t really see why the interview format was needed. I think the story would have been just as effective if it was told from just one point of view – and it would have been a lot less confusing, too. I thought Alan’s story was really interesting, but the confusing shifts in point of view really jarred me and pulled me out of the story.

One thing that really disappointed me about this book was how the LGBTQ aspects of Alan’s life were breezed over and felt like they were thrown in at the last minute. Alan Turing was a gay man living in a time when homosexuality was illegal in England. When it was revealed that he was gay during a court case, Alan was forced to undergo hormonal treatments in an attempt to “fix” him. These treatments ravaged his body and destroyed his spirits. He ultimately ended up committing suicide and a brilliant mind was lost. But these tragic points of Alan’s story were barely mentioned! There are just a couple pages on his hormonal treatments and then suddenly the book ends and he has committed suicide. The book mostly focused on Alan’s contributions to science and WWII, and yes, these are important aspects of his life that should be remembered. But the fact that he was a gay man forced to undergo hormonal treatments which led to his suicide should not be brushed under the rug.

When you feel like you only got half the story…..