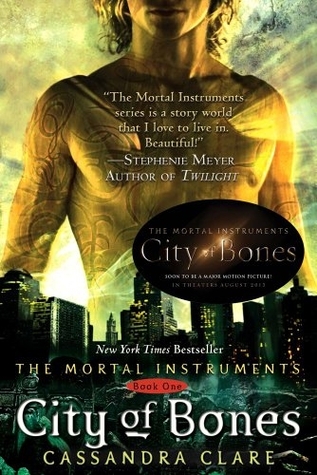 City of Bones by Cassandra Clare
Published by Simon and Schuster on April 14th 2009
Pages: 512
Goodreads


I have had the Mortal Instruments series sitting on my shelf for probably a year now, and with the recent announcement that the series will be turned into a TV show, I figured now is the best time to dive into the series and get cracking. I want to be able to enjoy the series before I run the risk of seeing any spoilers or get too used to seeing certain actors playing the characters from the books. Unfortunately, I have seen pictures of the cast, so when I was reading City of Bones I kept picturing the Old Spice guy fighting off demons in nothing but a towel (Isaiah Mustafa, better known as The Man Your Man Could Smell Like from the Old Spice commercials, will be playing the role of Luke Garroway in the TV show). It definitely made for an interesting image…

Now, unfortunately, I had been slightly spoiled for City of Bones (NOTE: Literally while writing this review, I had some YouTube videos playing in the background and I was just spoiled for the next book, City of Ashes!!! Thanks a lot internet……ugh). I have also read Cassandra Clare’s Infernal Devices trilogy, so I am familiar with the Shadowhunter world and Clare’s writing style. While I was reading City of Bones, I tried really hard to read it as though I had no preconceived notions about the book, the author, or the world. That proved to be incredibly difficult, but we will get more into my opinions on that a bit later.

All in all, I think City of Bones was a good book, but I wouldn’t call it mind-blowing. The book introduces us to our main character, Clary Fray, who is thrown into a world that she didn’t even know existed – a world of vampires, werewolves, warlocks, and demons. Now, I don’t know about you guys, but if I suddenly saw a demon walking down the street, I might freak out a little bit – ok, a lot – and I would definitely start asking some serious questions of the people involved. But Clary just seems totally fine with this new realization. She is so ridiculously accepting of her new life that it is pretty unbelievable.

Also, I found that there was a lot of missing information about the entire Shadowhunter world in this book. [Example: Jace and Alec are said to be parabatai, but there is barely any description of what that means or how that partnership came to be.] I knew about the Shadowhunters because I have read Clare’s other books, but I think if City of Bones was the first book I had read about this world, I probably would have been a little confused. Maybe there is more description in the upcoming books and I just haven’t read it yet.

There is lots of talk on the internet about the character of Jace Wayland being very similar to William Herondale from the Infernal Devices. Ok, yeah, they do have some similar qualities, but that didn’t bother me that much. I felt like the two characters seemed like carbon copies at first, but they really aren’t. As the book progressed, I stopped noticing similarities between the characters. The one thing that did bug me was that there was pretty much the EXACT same scene in the two series. Jem with the violin in Clockwork Angel and Jace with the piano in City of Bones (sounds like a weird game of Shadowhunter Clue). Now maybe there is a reason for this scene popping up in two different places and I will be proven wrong, but until then – it bugged me.

Also, there is a bunch of discussion about the end of this book out there in the bookish community. Yeah, the ending was a little weird. Again, what I thought was the strangest was Clary’s reaction. I’m interested to see how the characters move forward from here. Guess I’ll have to keep reading!

One final note: There are two things about Cassandra Clare’s books that I really love. She always manages to include a character who loves books in her works. It’s like a little nod to her audience of book nerds and it makes me smile. Also, she is an author that really creates quite a diverse cast of characters. She is not afraid to introduce all different types of people to her readers, including LGBTQ characters, and I really respect that.

Alright, so now to the love it or leave it part….To be honest, if City of Bones had been my first Cassandra Clare book, I’m not entirely sure if I would have continued with the series. I did enjoy the book, but it just wasn’t enough to really hook me. However, I have read her other books, and so I say: City of Bones may not be the greatest of Clare’s works, but don’t let it be the last of her books that you read. PLEASE continue the series with City of Ashes or try the Infernal Devices series. Since I know what Clare is capable of, I am very excited to see where this story takes me. She really is a master storyteller. She writes books that I just don’t want to put down, and 500 pages goes by in a snap. Give her a try….do it….seriously….go pick up that book.

PS – While I was editing this post, I was spoiled for this series AGAIN!!! I’m going to have to take a break from watching some videos, because this is getting ridiculous. Let me read my books in peace, internet!

Have you read City of Bones? What are your thoughts about this book as an introduction to the series?

***PLEASE no spoilers for the series in the comments. Thank you!***

When you get sucked into a series – and realize you have five more books that you now have to buy….